I have always loved Arnold Lobel, but especially since I have had kids of my own and read them the Frog and Toad books.  It's a great first introduction to humor for your kindergarten-aged-kids.  Grasshopper on the Road never fails to make me laugh, as well.  When grasshopper meets a bunch of beetles who believe that morning is the best, and he dares to venture that he likes evenings, too, one beetle replies in a deadpan, "Stupid."  It cracks me up every time.

So, quite a while back, I found an Arnold Lobel book at the D.I. that I had never seen before, called Whiskers and Rhymes.  It was pretty beat up. 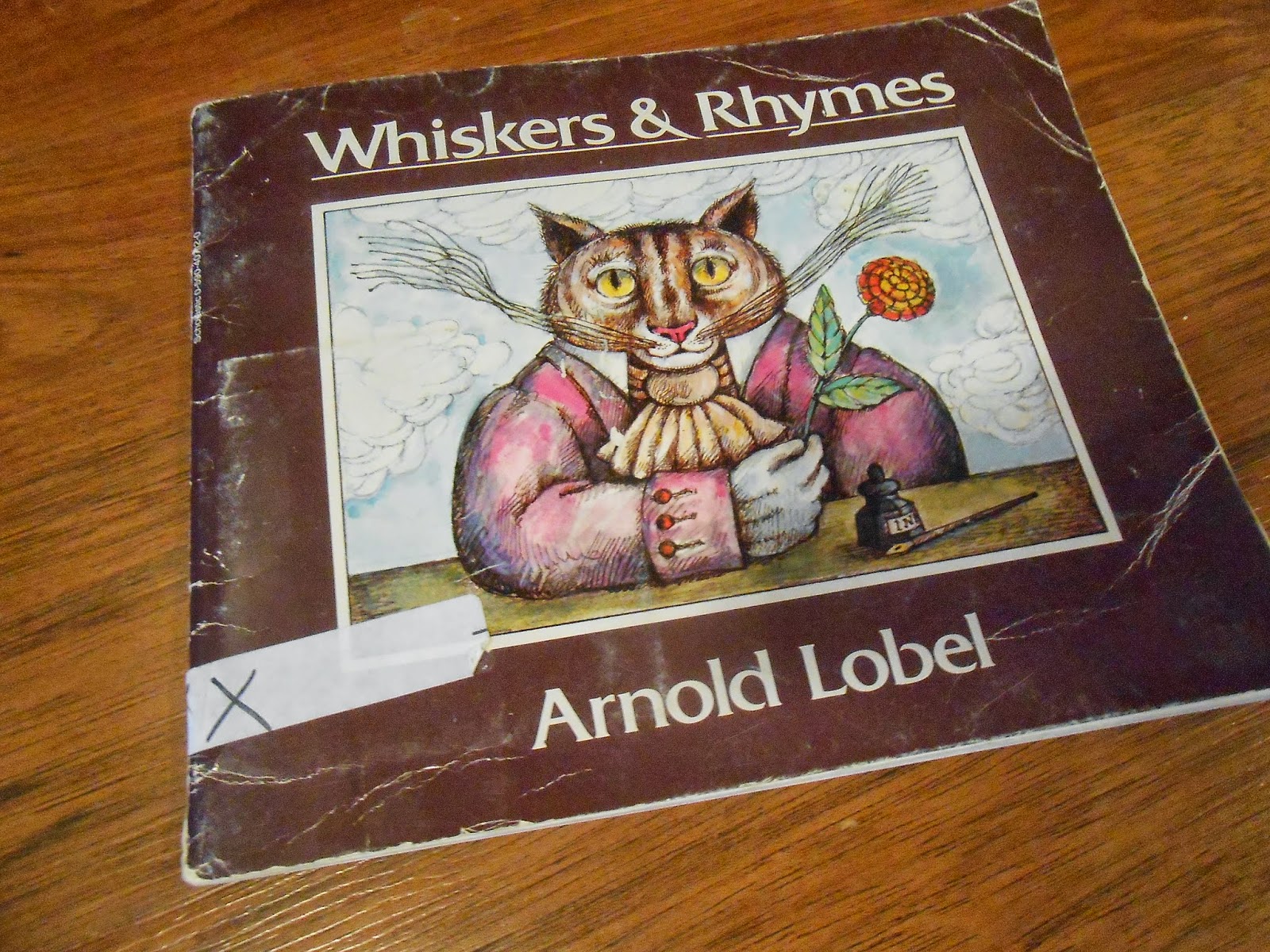 It's nursery rhymes populated entirely by cats, and many of the poems are quite funny.  I flipped through it, and found the coolest Arnold Lobel illustration ever: a cat with a beard reading a huge stack of books--so big that his house is coming apart.  And the rhyme that accompanied the illustration spoke to my SOUL:
Books to the ceiling, books to the sky!
My piles of books are a mile high!
How I love them!
How I need them!
I'll have a long beard by the time I read them! 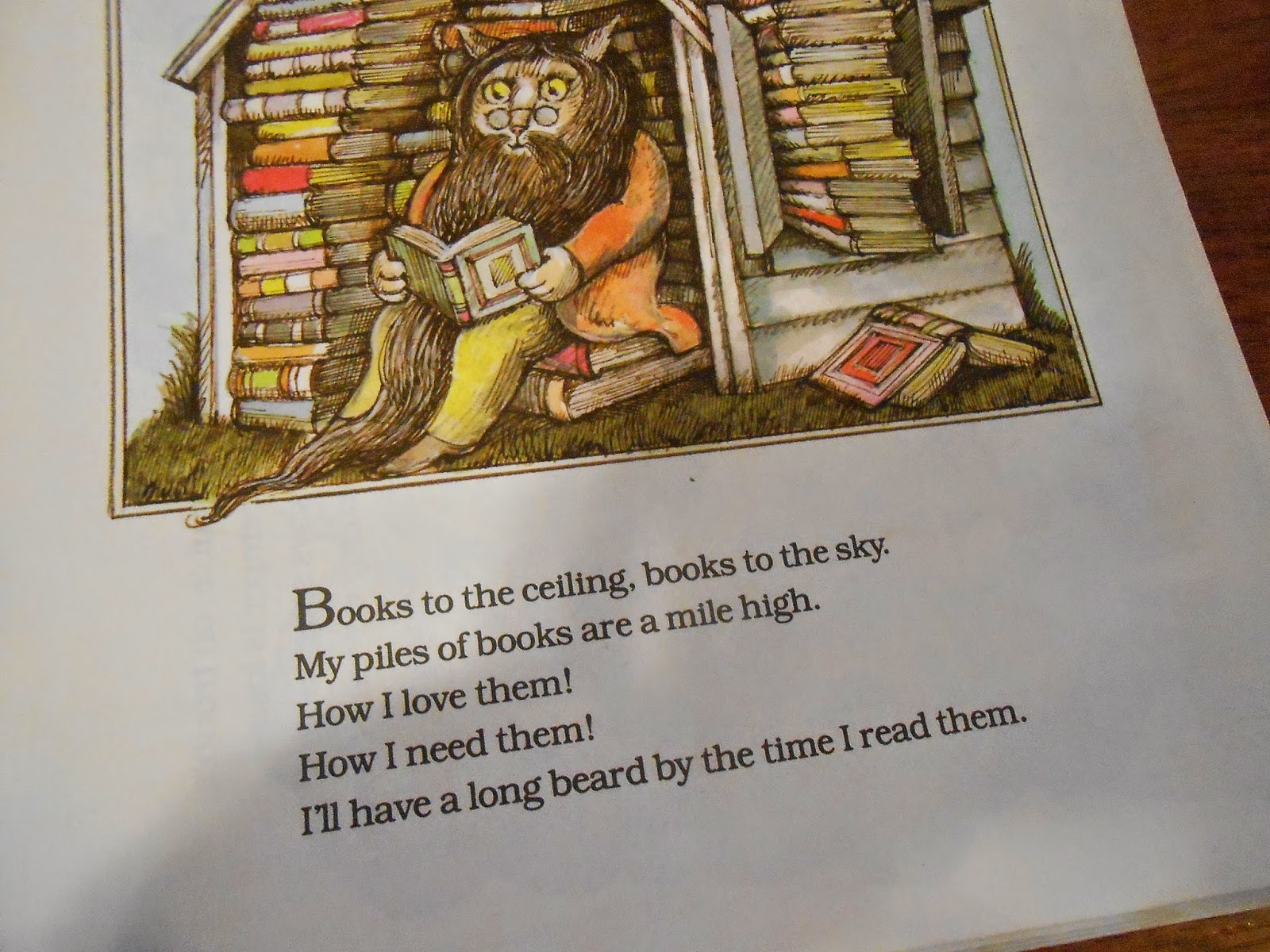 I knew I must have this illustration and poem hanging in my "book nook"--a little landing at the top of the stairs in my 1915 house, where all the children's and young adult books are kept.  It's a little ironic, because I've been meaning to frame a few different pages from Lobel's Owl at Home, since my book nook is heavily populated with owls . . . but it took cat nursery rhymes to transform this idea in to reality.  It was just serendipity that they happened to be from the same author/illustrator.

Okay, first I had to find long, skinny frame for the illustration.  It actually took a few months of looking at the D.I. till I found the right one:
Next, I removed the staples from Whiskers and Rhymes and took out my picture.  It wasn't the middle page, so it was two separate pages that I had to carefully tape together (on the back, of course). 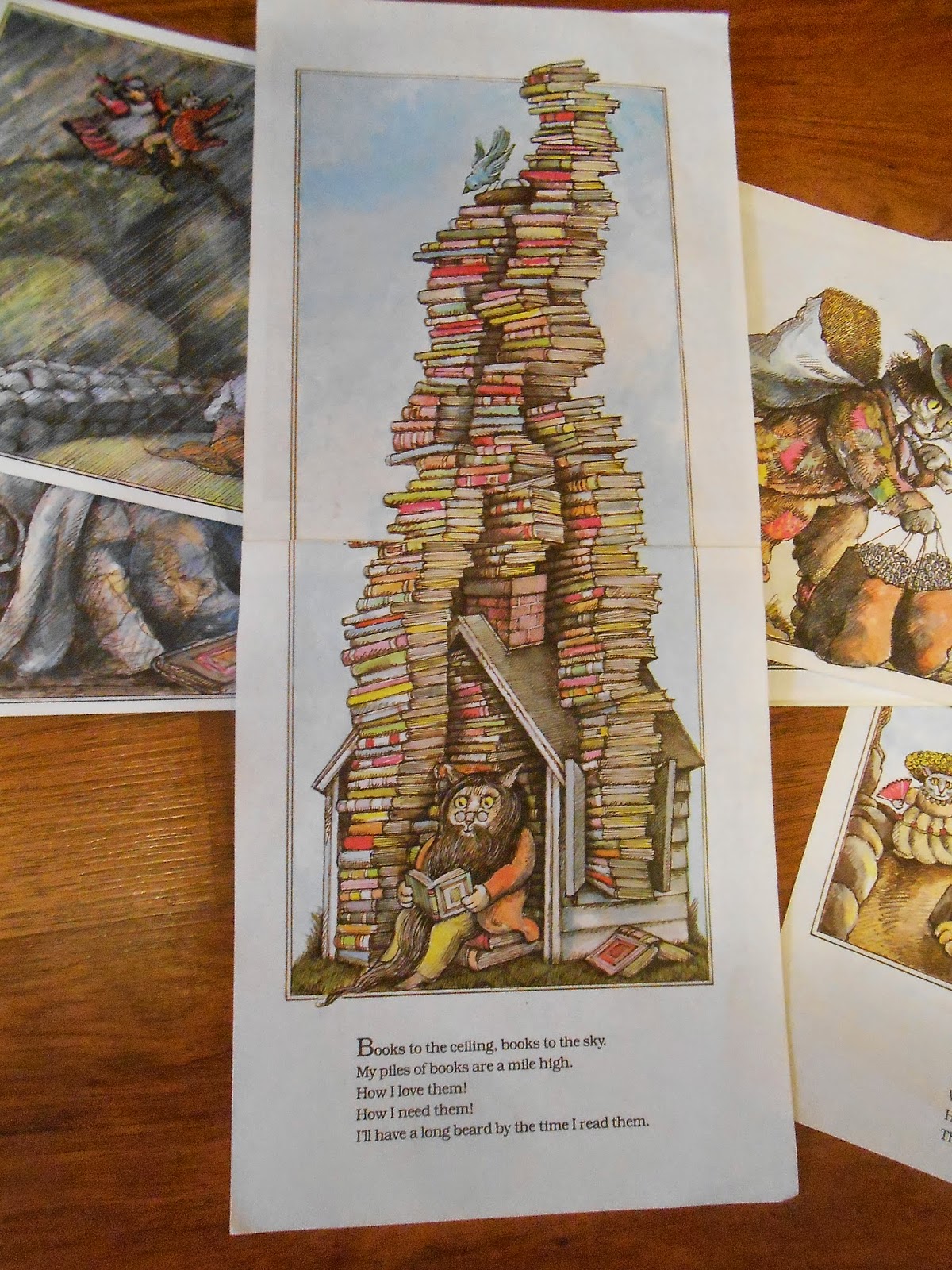 I cleaned up the frame, trimmed my picture a bit to make it centered, then covered the WRETCHED dishes picture with the delightful book picture.  The dishes picture wasn't matted--it had a faux-matte of navy blue around it.  I considered cutting out a matte, but didn't have the tools to make it perfect, so I just carefully glued my picture in the center. 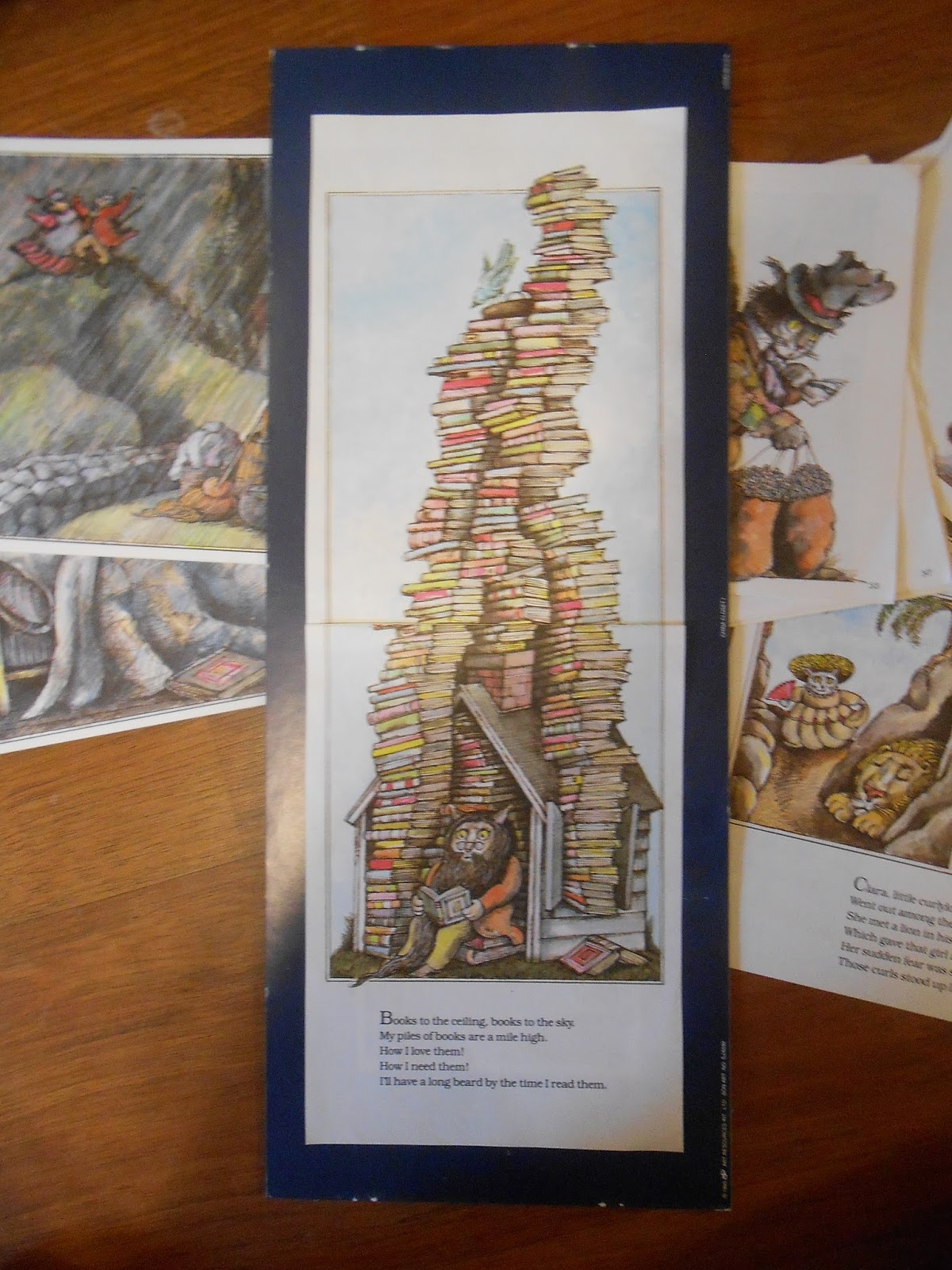 Now the best part!  Putting the picture inside the frame and hanging it up! 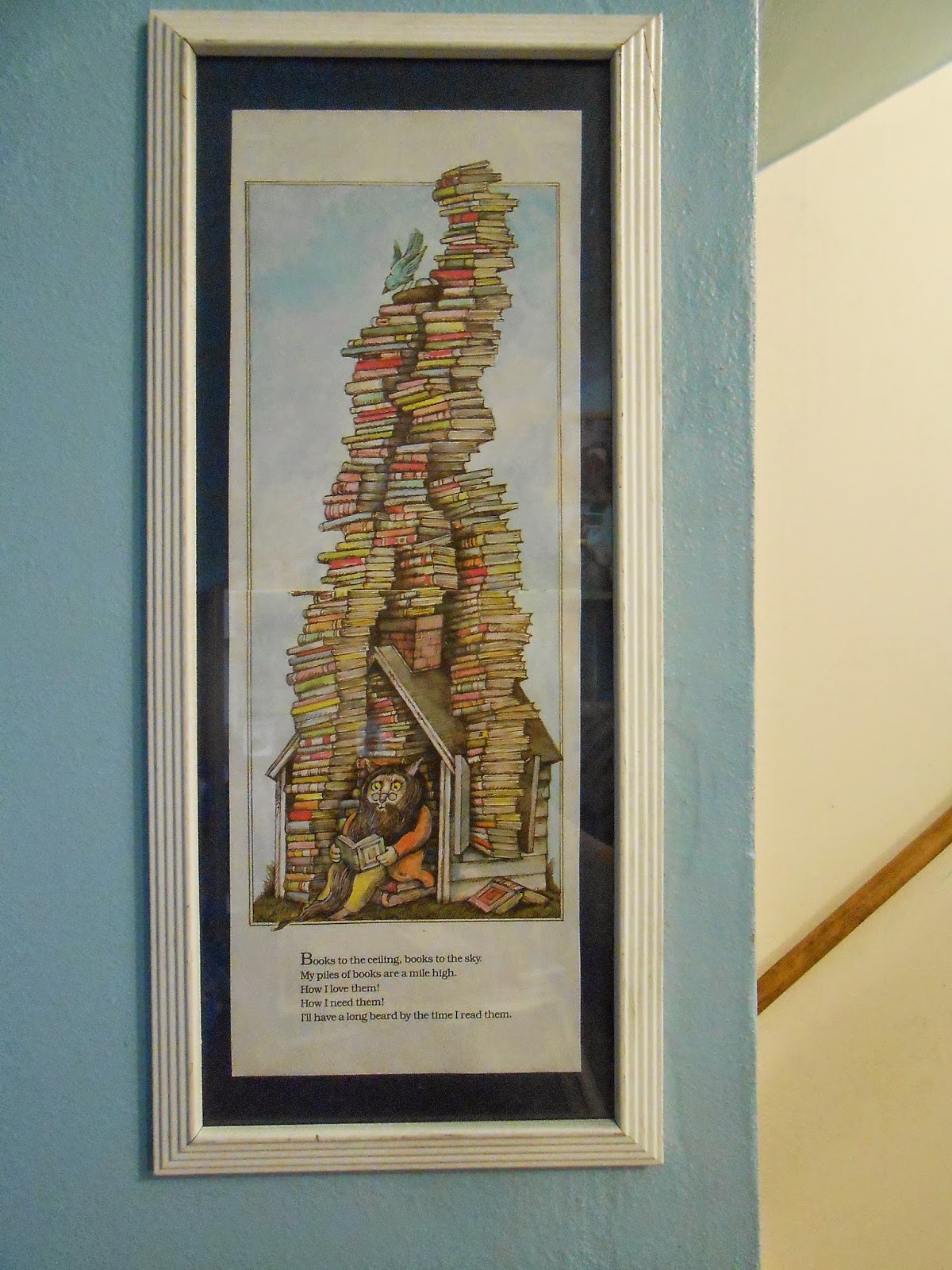 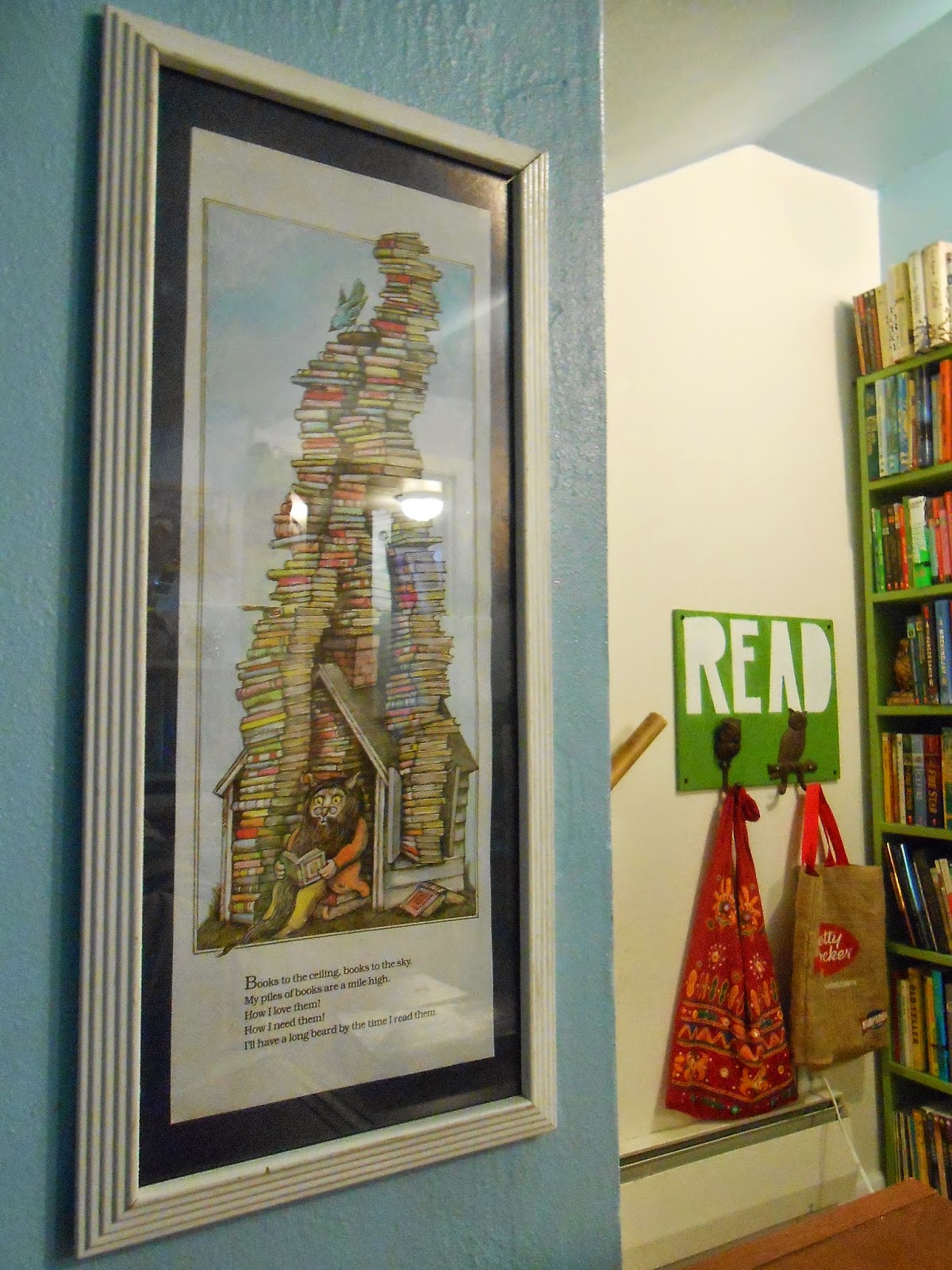 This entire project cost me $2.25: twenty-five cents for the book, and two bucks for the frame.  I didn't even have to paint the frame or change the color of the matte!

I love it so much that now I'm finally on the prowl for some cool, smaller frames to put some illustrations from Owl at Home into (I have long had two copies of Owl at Home--one to read and one for art).

I also love it so much that it inspired my choice of books for my May display--I love to change the children's books on display like a library does, and usually have a holiday or seasonal selection of books for each month.  In March I had all green books; in April I had chickens/ducks/geese books on display for Easter.  I was thinking of doing books with flowers for May, but discovered that I only have three books with large flowers on the cover.  But as I was going through all the children's books, I discovered that there are quite a lot which have a similar thing on the cover: CATS.

My next post will be about my book displays--it is so cheap and easy to collect some great children's books, it's a fun and adorable way to decorate, and it's an awesome way to motivate your kids to READ. 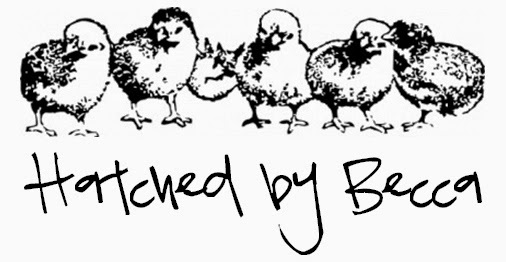 Labels: art, Becca, before and after, books, Fabulous Frames, shelves